The town is located on the right bank of Lake Đerdap on the Danube, and is located in the Đerdap national park. The Miroč mountain lies between Donji Milanovac and Tekija and further to the south are the Kučaj mountains. The Miroč is known for the abundance of the medicinal herbs while the area surrounding the town is covered in lush deciduous forests.[2]

Via Danube, Donji Milanovac is 198 km (123 mi) away from Belgrade. It is situated in the Veliki Kazan gorge, a section of the composite Iron Gate gorge. At Donji Milanovac, the Danube is 170 m (560 ft) wide and 90 m (300 ft) deep. The locality on which the settlement is today used to be called “Trkulja’s gallery”, after a local artist. A balloon station “Pena” was situated on location, as prior to the discovery of radio, balloons were used for signalization during the navigation through the canal.[2]

Prior to the construction of the Iron Gate I Hydroelectric Power Station, which dammed the Danube and created the Lake Đerdap in 1967–72, belugas from the Black Sea reached the gorge, travelling upstream for 1,000 km (620 mi). Specimen, up to 300 kg (660 lb), used to be fished in Donji Milanovac. The dam prevents belugas from swimming upstream since, so the largest fish in the lake now is wels catfish, with rare specimen reaching 100 kg (220 lb).[2]

Donji Milanovac lies on remains of an 8000-year-old Mesolithic settlement of the Lepenski Vir, and of the Roman town of Taliata. Since the founding of the first settlement, Donji Milanovac was moved three times. It was originally established as a settlement called Banja which was moved some 10 km (6.2 mi) upstream, on the island of Poreč (which also became the name of the settlement), during the 17th century. In 1830, due to frequent flooding, Prince Miloš ordered the town be moved to the nearest, right bank, so it was resettled 2 km (1.2 mi) downstream, at the mouth of river Oreškovica into the Danube. It became the first town in Serbia built by architectural planning. After construction of the “Đerdap I” hydroelectric power station in 1970, the town was moved again to its present location, another 6 km (3.7 mi) downstream, and the old site was completely flooded by the Lake Đerdap in 1971.[2][3] 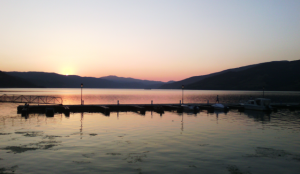